Lomonosov bridge, also known as Chernyshev bridge, is located in the central region of Saint Petersburg. The bridge crosses the Fontanka river where it intersects Lomonosov Street.

Initially the bridge was wooden and was called the Catherine bridge in honor of the Empress Catherine the Great. But that name did not stay long, and by the moment of capital restoration in 1785 it was already called Chernyshev — of the same name as a close-by lane.

Chernyshev bridge is 14,66 m wide and 57,12 m long. The bridge is angled to the Embankment of the Fontanka river. The facade sides of the bridge, turned to water, appeared to have unequal sides. The bridge was designed by an engineer Jean-Rodolphe Perronet, who also planned several typical bridges — Simeonovsky, Anichkov, Semenovsky, Izmailovsky, Staro-Kalinkin and Obukhovsky.

The bridge had stoned pillars and arched spans. There were four towers on granite stems in the central park of the bridge. Originally, a middle raising span stayed wooden. Practically, a stoned bridge didn’t change over time since it was built. 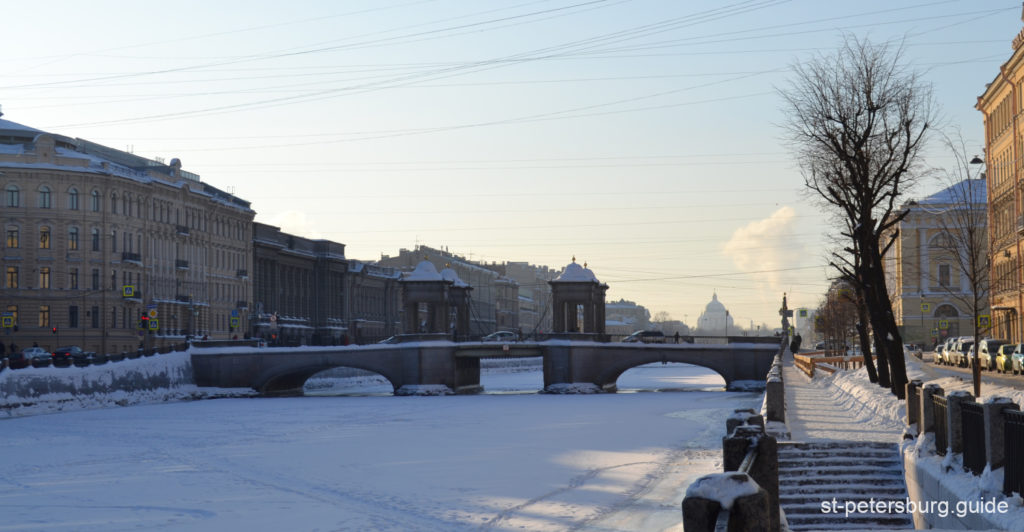 However, as well as other bridges across Fontanka, Chernyshev bridge was about to restore. In 1826 it was suggested to rebuild the central span of the bridge and cover the span with cast-iron prefabricated boxes. The project was confirmed, but fortunately was not started. Another try to rebuild the bridge was in the beginning of the 20th century. However, as the first Russian revolution 1905-1907 broke through, the project was not realized.

In 1912-1913 the bridge was overhauled under the supervision of an architect A.P. Pshenitsky. Pillars and vaults were totally renewed, while granite blocks were partially replaced. Steel beams were installed instead of a wooden span. Towers and chains stayed unchanged.

In 1915 an architect I.A. Fomin offered a bridge lighting project. He offered four moderately high granite obelisks with lanterns held on golden figures of seahorses. This way the bridge stays to this day.

During the Great Patriotic War and the Siege, Chernyshev bridge was hardly damaged: granite parapets and obelisks suffered a lot. They were restored after the war. On August 23, 1948 the bridge lost its regular name. It was called after the Russian scientist Mikhail Lomonosov.

Lomonosov bridge is a part of my private tours: