Saint Petersburg is known for their sights dedicated to the triumph of the Russian weapon. One of the most impressive attractions is the Narva Triumphal Gate or, the Narva Triumphal Arch. This wonderful construction in the Empire style was erected in 1814 in honor of the war victory against Napoleon.

The gate, projected by the Italian architect Giacomo Quarenghi, were initially wooden. On their return from Europe the Russian army solemnly went through the Arch on July 30, 1814.

Ten years later the wooden construction got worse and stopped matching the solemn look of Saint Petersburg. The Emperor Alexander I ordered to build the stoned arch on the very same place. The project was realized by the architect Vasily Stasov who later was also in charge of Moscow Triumphal Gate, Trinity Izmailovsky Cathedral and more.

The first stone of the triumphal arch was founded in August 1827. Stasov came up with a unique brick construction, covered with copper sheets. Sculptures, i.e. a six horses drawn chariot and a statue of the Glory, that adorn the Narva Triumphal Gate were also made of copper. 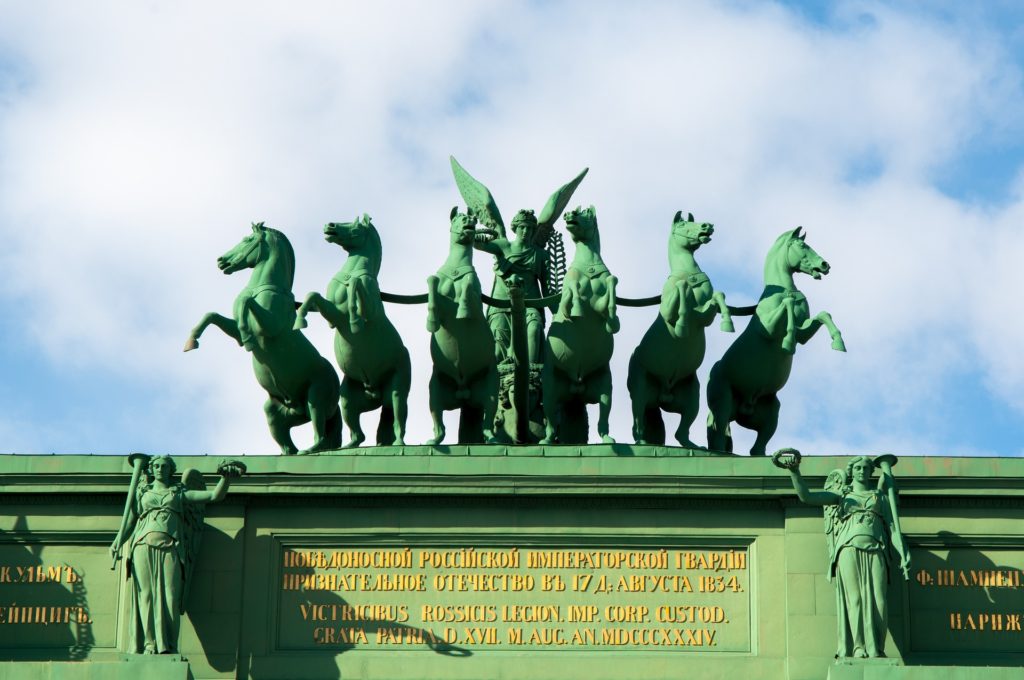 The arch was ready in summer 1834. The gate is 23 meters high, and 30 meters high if measuring together with a statue on the top. On the bottom of the pillars, the architect placed Russian prince-knights. The facade was adorned with golden inscriptions to glorify native heroes.

According to Stasov, the inner premises of the Narva Triumphal Gate were supposed to use for an exposition of 1812. However, this idea was not implemented. Instead the premises were occupied with the barracks of a soldier’s outpost that checked people who entered Saint Petersburg from the side of Narva.

The gate was restored several times. High humidity caused the corrosion of copper. All copper elements were later replaced with steel pieces, but it did not solve the problem.

In January 1905, one of the most tragic events of the Russian history took place next to the Narva Triumphal Gate. Police shot a peaceful demonstration that was going to the Emperor Nicholas II. The Bloody Sunday affected the name change of the Narva Square to the Square of Strikes (Ploshchad Stachek) in 1918.

A wide-scale reconstruction the arch was started in 1925, but it was not completed until the beginning of the Great Patriotic war. During the Siege, the Narva Triumphal Arch was bombed a lot. Only in 1949 the gate was fully restored. The latest refurbishment took place in 2003.

The gate is open all year round for outside seeing.