On Nevsky Prospekt across Fontanka

One of the first and the most popular bridges in St Petersburg – the Anichkov bridge. It’s among three bridges that follow the Nevsky Prospekt and cross the Fontanka river. Having wonderful sculptures of horses, this bridge is easy to recognize and memorize. Anichkov bridge consists of 3 spans, and it is almost 55m long and 37,9m wide.

During the construction of Nevsky Prospekt, there was a need to build a passage across the river Erick (former title of Fontanka). Under the order of Peter I a wooden bridge was constructed in 1715. It was called Anichkov bridge – in honor of name of an engineer-lieutenant colonel Mikhail Anichkov. His regiment located in that place and built the bridge. It was 150 meters long and covered the swamp part of the river.

Back in the past, the outskirts of St Petersburg with a customs point were there. To enter the city, it was necessary to pay the fee in a form of money or stones to pave the streets. In 1726 the crossing became swing and it was open for ships.

Architect Semyon Volkov designed a new wooden bridge in 1749. One of the version says that bridge was enhanced so the elephants presented to the Empress Elizabeth Petrovna by the Persian shah Iran. That bridge was decorated with granite look-like desks.

In 1780s, there were seven stone bridges of the same kind across Fontanka, Anichkov one was also reconstructed. It became granite. Among seven bridges, only two exist nowadays – Lomonosov’s and Staro-Kalinkin.

Gradually Nevsky Prospekt got wider and by 1840s its width was greater than the bridge’s one. That is why, in 1841 Anichkov bridge was disassembled, and seven months after a new construction by Ivan Buttats and Alexander Reder appeared. Lieutenant general Andrey Gotman supervised the projected. 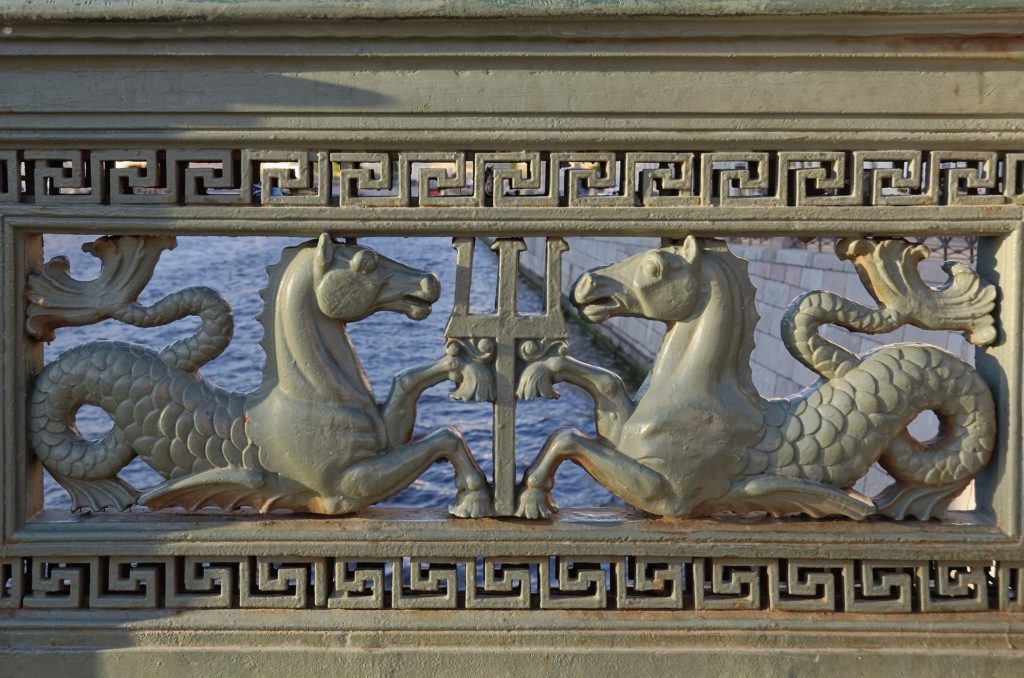 Opening ceremony took place in January 1842. Three spans were paved with bricks and covered with granite. Cast-iron lattice, decorated with seahorses and mermaids, was established at that time. Lattice with the same images are set on the Palace bridge in Berlin. 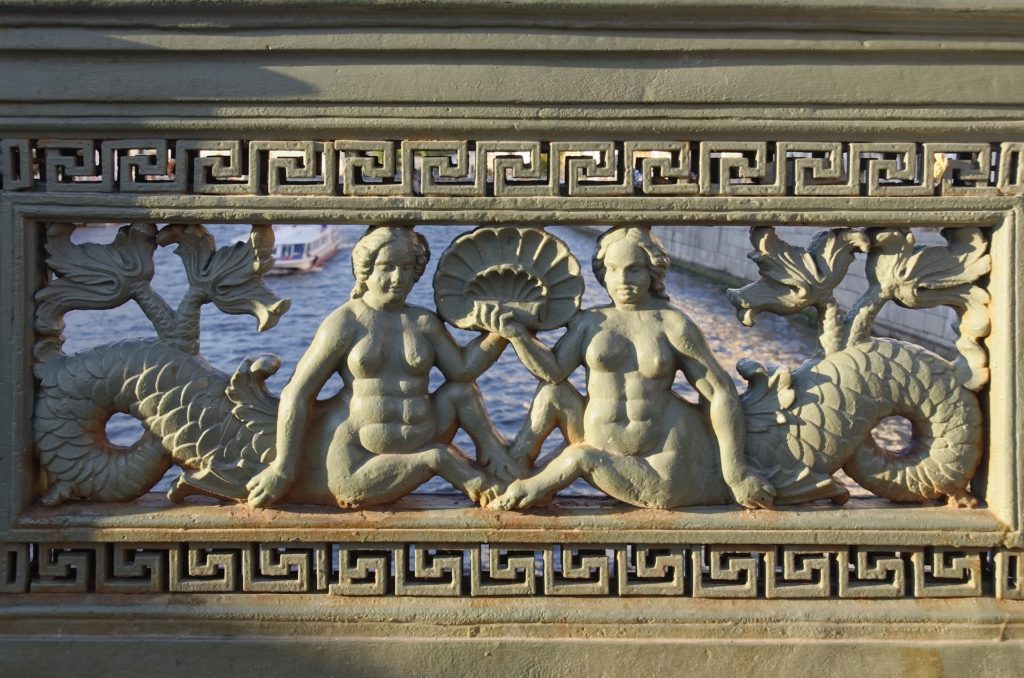 The researches of 1843, 1847, 1855 and 1899 years proved that the construction had short-comings that affected bridge’s functionality. Renovation took place in 1906-1908 under the supervision of architect Petr Tshusev. Brick vaults were then adjusted and covered with pink bricks.

During the Great Patriotic War, shells damaged the granite parapets and railing. Even nowadays you can see a dent on one of the pedestals.

Brick blocks and other construction works were also done in 2007-2008.

Sculptures on the Anichkov bridge

In 1841 architect Petr Clodt worked on the sculptural composition that were supposed to be placed on the Embankment of Neva opposite to the Academy of Arts. But when the embankment was adorned by the sphinxes, the bronze sculptures were places on the western side of the Anichkov bridge, close to the Admiralty. Temporary gypsum figures decorated the eastern side of the bridge. Petr Clodt casted the sculptures, but it took almost ten years to finish the composition. 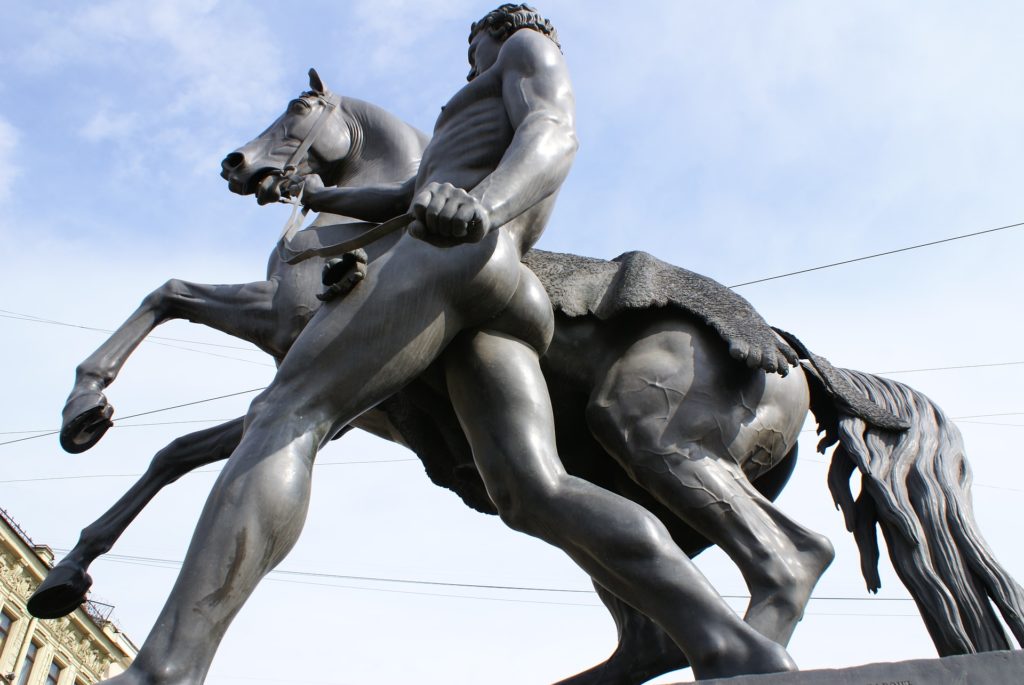 Horses were presented several times and decorated various palaces. Thus, in 1842 they were gifted to the Prussian king Friedrich Wilhelm IV. Now you can see them next to the gates of the King’s Palace in Berlin. In 1844 new casted sculptures were set on the bridge, but two years after – presented to the king of Sicilia Ferdinand II. Those horses are now in front of the King’s palace in Naples. Next sculptures were placed in Peterhof, but they disappeared during the Great Patriotic War. Also there were horse figures in the farmstead of Golitsin in Kuzminsky park. They are safe nowadays. 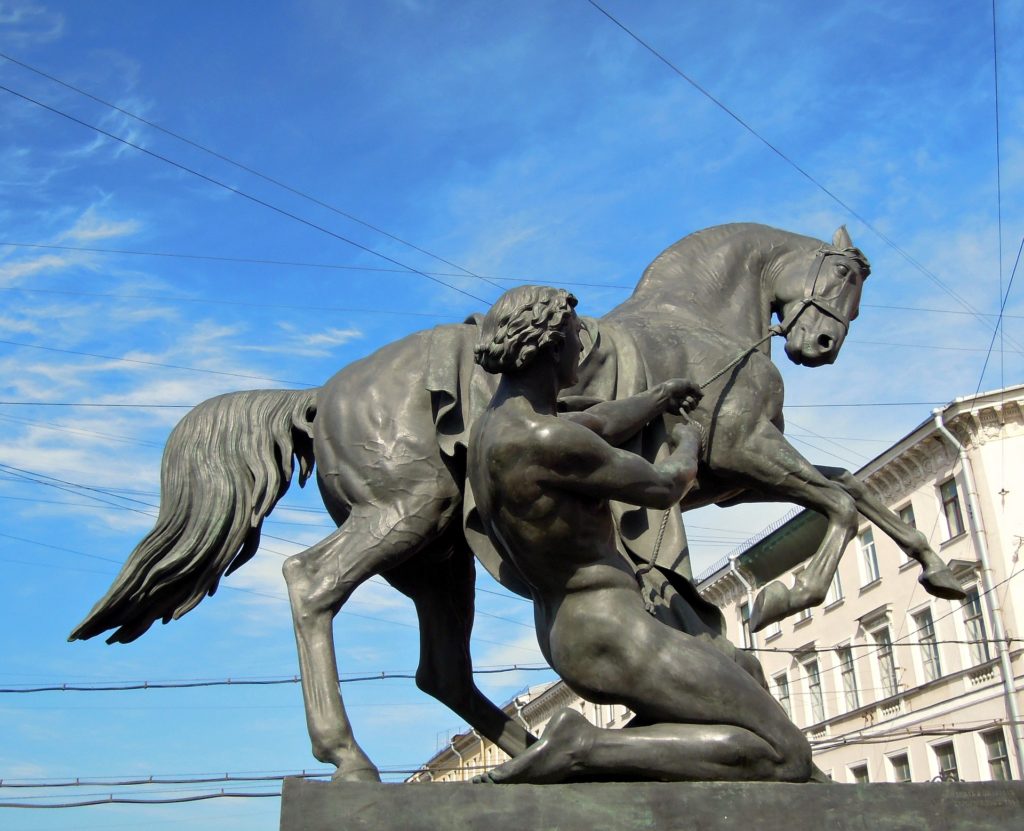 Only in 1850 two new sculptural compositions were established on the eastern park of the bridge. So in total, there are four sculptural groups:

In the times of the Great Patriotic War, the sculptures were dug in the yard of Anichkov Palace and returned on the pedestal before May 1, 1945.

Anichkov bridge is a part of my private tours: