The story of a merchants’ firm of the Eliseevs started in the 1810s. It was established by a former serf from the Yaroslavskaya province – Pyotr Eliseev.

According to one legend, a gardener of earl Sheremetev – Pyotr Eliseev – presented a saucer with fresh wild strawberries on one Christmas evening. Being surprised, the earl asked the gardener what he wanted for such a treat. Pyotr asked for a manumission paper. The earl kept his promise and apart from the paper, gave Pyotr 100 rubles. That was a huge sum back in the days, and Pyotr went to Petersburg. He bought a bag of oranges, went to Nevsky Prospekt and started selling.

There is another story, according to which Pyotr Eliseev went to Saint Petersburg, worked as a loader in the port and soon became a manager of an artel. Thanks to his proactive character, he soon opened several shops on the central streets in both capitals.

Ninety years later, a grandson of Pyotr Eliseev – Grigory – became a huge and famous entrepreneur. A 32-year old Grigory Eliseev together with his wife Maria Andreevna established a trading partnership. Its turnover had a several million ruble increase during the first year of the company’s operations. Eliseev was a merchant who also built schools and hospitals, shelters and almshouses. When the trading partnership earned great assets, spouses opened their own shops. In Moscow their shop was open in the mansion of earls Beloselsky-Belozersky.

The project of the shop on Nevsky Prospekt was developed by the architect Gavriil Baranovsky. A modern-styled building was constructed in 1902-1903. 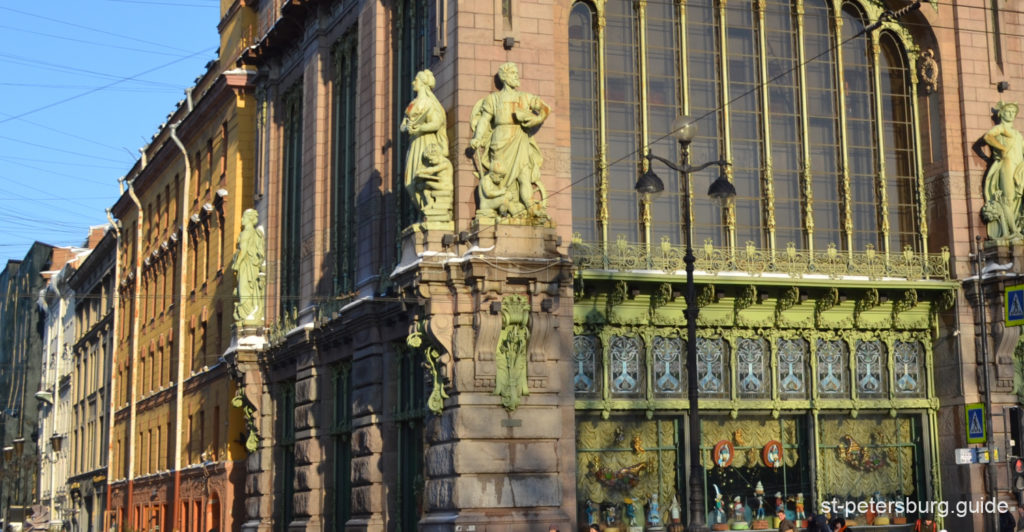 The building of Eliseevy Merchants’ Shop

There are allegorical sculptures “Industry” and “Trade”, “Art” and “Science” on the facade of the building. They were created by the sculptor Amandus Adamson. Huge window-walls expressed the commercial use of the building.

The shop on Nevsky Prospekt was open in 1904. It was an enormous public event. People were impressed by the architecture and interiors of the building. Marble counters decorated by red wood, colorful stained glass windows and beautiful tiles made a great impression on shop visitors.

The second floor of the building was given to the Theatre of Satire, that’s known nowadays as Akimov Comedy Theatre. There was a restaurant on the third floor. Before performances, guests usually went to the restaurant and enjoyed fruit, chocolate and wine. The entrance to the theatre is located inside Eliseevy Merchants’ Shop. 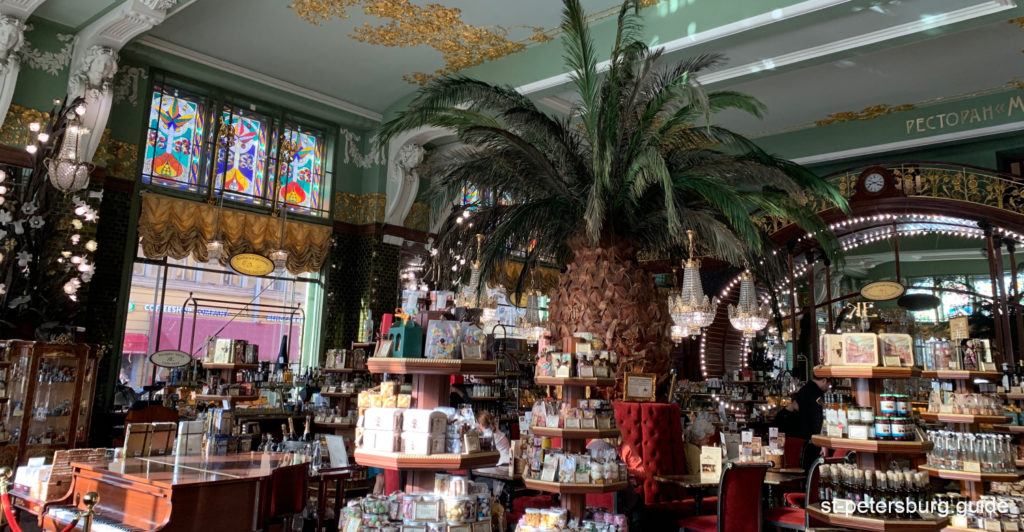 A shopping room had a posh decoration and exotically decorated showcases, lit by fancy wall lamps. According to one of the legends, in 1917 Eliseev turned their wealth into gold which then a chandelier in the shopping room was made from. It was supposed to stay and “wait” for its owners to come back to Russia from the immigration. In fact, there were no chandeliers at that time. They appeared only in the 1930s for lighting cashiers.

The shops of the Eliseevs brothers became very popular in Russia, their goods were considered the best. In the Soviet times, Eliseevy Merchants’ Shop was called Gastronome no.1. There were always delicacies.

By the way, there were two brothers – Grigory and Alexander. Alexander was on a state service, while Grigory kept the trading tradition. After the revolution, Grigory went to France, his entity in Russia was eliminated. A hundred year history of the partnership ended.

Since the 70s of the 20th century, when shopping shelves were empty elsewhere, there were still products in the Eliseevy Merchants’ Shop. However, they were meant for high party clerks as some famous actors, writers and sportsmen. They could buy mandarins, bananas, caviar, pineapples and sausages – products unavailable for common residents of Saint Petersburg.

Nowadays, the Eliseevy Merchants’ Shop is an elite product boutique, and a popular sight to visit during a walking tour around Saint Petersburg city centre. 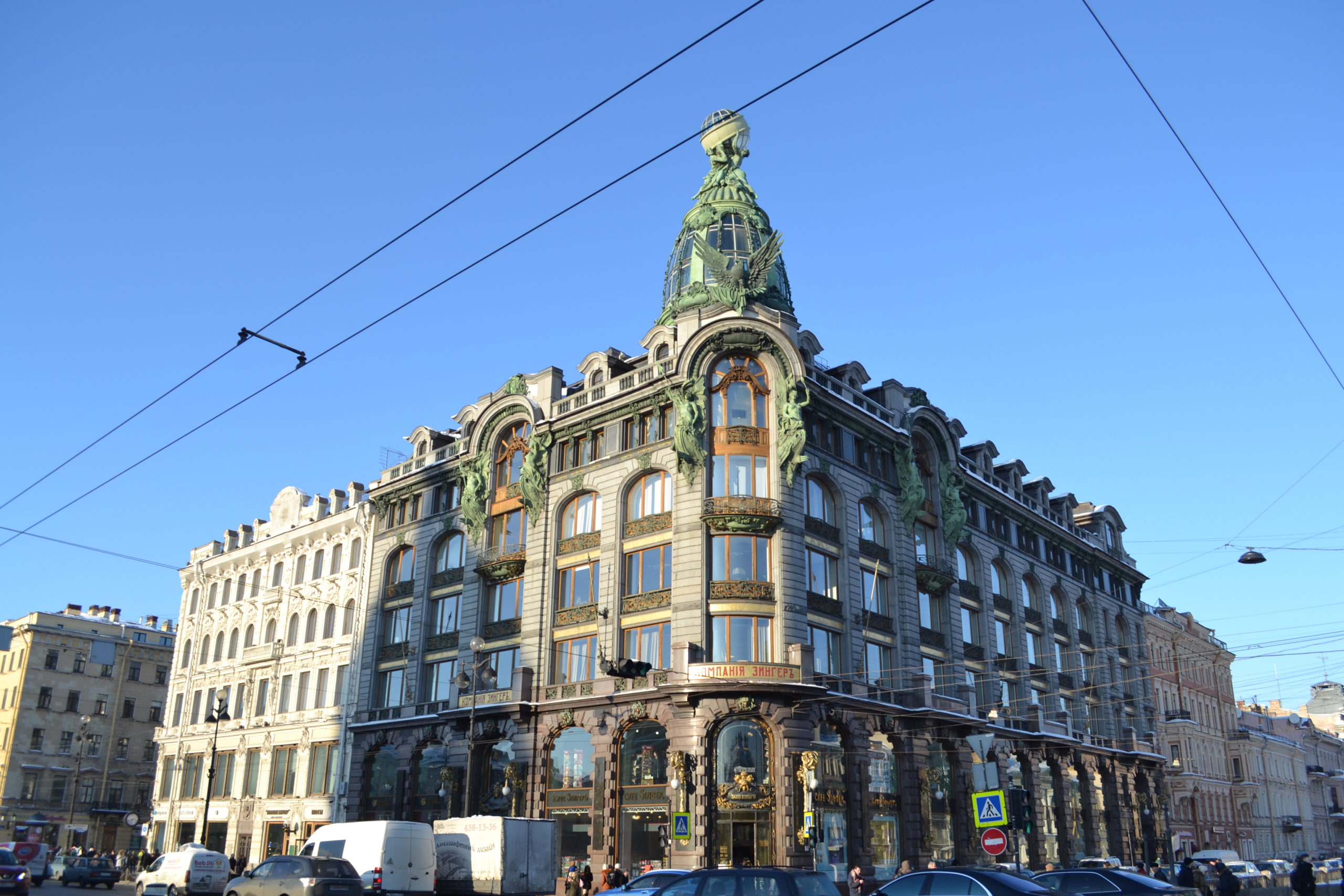