The famous House of the Book

All city residents and many guests know this beautiful building of Singer House, located on the crossing of Nevsky Prospekt and Griboedov Canal close to Kazan Cathedral. A current book store – Dom Knigi (House of the Book) – is one of the cultural centers of Saint Petersburg.

In 1776-1777 there was a three-story  building, and in the second half of the 19th century one more floor was added. At that time the first photographer of Saint Petersburg – Sergey Levitskiy – had his studio and workshops there. In 1902 the land was bought by a Singer company, a producer of sewing machines. The company intended to construct a building with a shop and local administration office of the company as well as lend lots of premises.

Nicholas II allowed implementing the project. It took two years from 1902 to 1904 to build it. It was the first time in Russia that architect Pavel Yulievich Suzor utilized an iron frame, filled with cement brickwork. This invention enabled constructing huge windows which in a way determined the style and look of the facade. Drainpipes were another architectural novation of the architect. There were hidden inside the walls so not to burden the outer design of the building. Ventilation and conditioning systems were the most modern for that time. 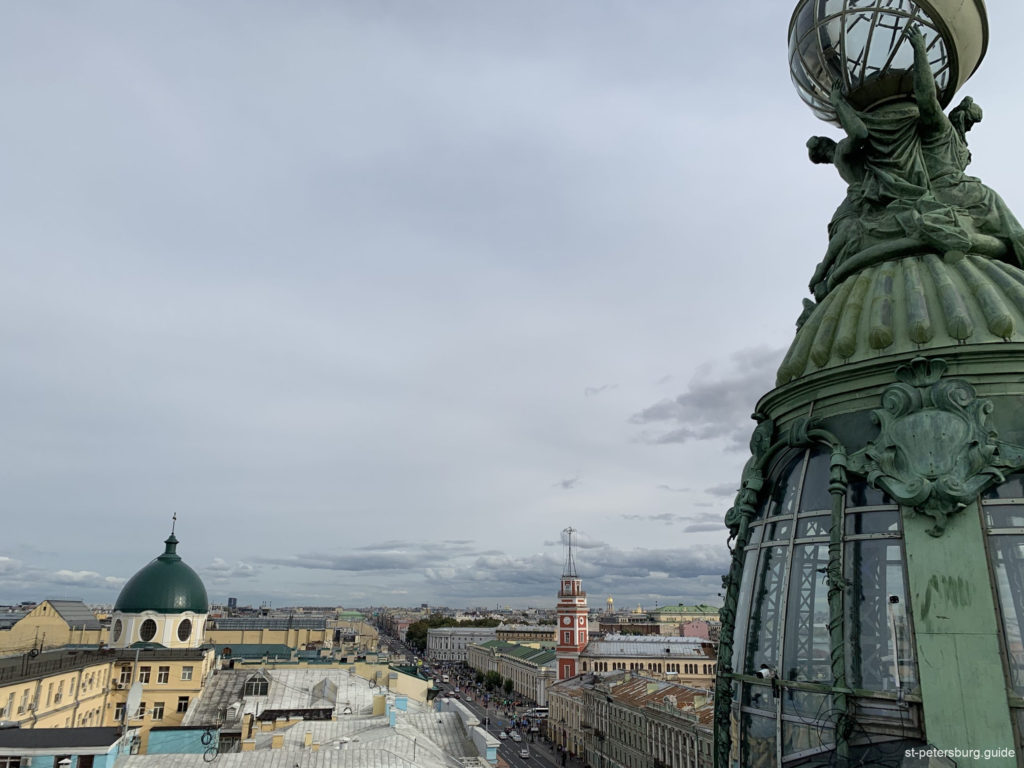 American embassy, a bank, a Singer’s shop and ethnographic exhibitions were located on the lower floors. Sewing studios were higher, and the attic was occupied by the Russian representative office of the company.

After the October Revolution, the building was transferred to the State Publishing House of Book. The House of Book accommodate the two lower floors, the rest were given to a range of editorial offices. The first book store opened there on December 19, 1919.

Dom Knigi continued its work during the Siege. In November 1941 a bomb hit, and a  blast wave busted the windows in Singer’s House. Later they were covered with boards and plywood, but the work of the shop did not stop.

After the Great Patriotic War, the building went under serious reconstruction, and on November 14, 1948 the House of Book opened its doors again. In 1949 a festive book market under the slogan “Book is the best gift” took place there, and after – it became traditional. Singer’s House was not just a shop, it became the cultural centre of the St Petersburg, a place to meet books’ authors and spend poetry evenings.

The building was also renewed in 2004, and since then The House of the Book stays the largest one in St Petersburg and one of the most known in Europe.

It was a six-storey building with an attic on the seventh floor. The facades were stoned with granite, while the inside yard had a glass roof. Singer’s House was one of the earliest modern-style buildings in St Petersburg. Its great panorama windows, intricate silhouette of the cupola, rich finishing, a variety of stylized decorative sculptures on the facades – all these details made the building very special and up-to-date.

There is a glass globe of 2,8 m in diameter on top of the corner tower. It served as a commercial of the company Singer and was entwined with a sign “Singer & Co.” lighted from the inside. The glass sphere is supported by a sculptural group that symbolized sailing. 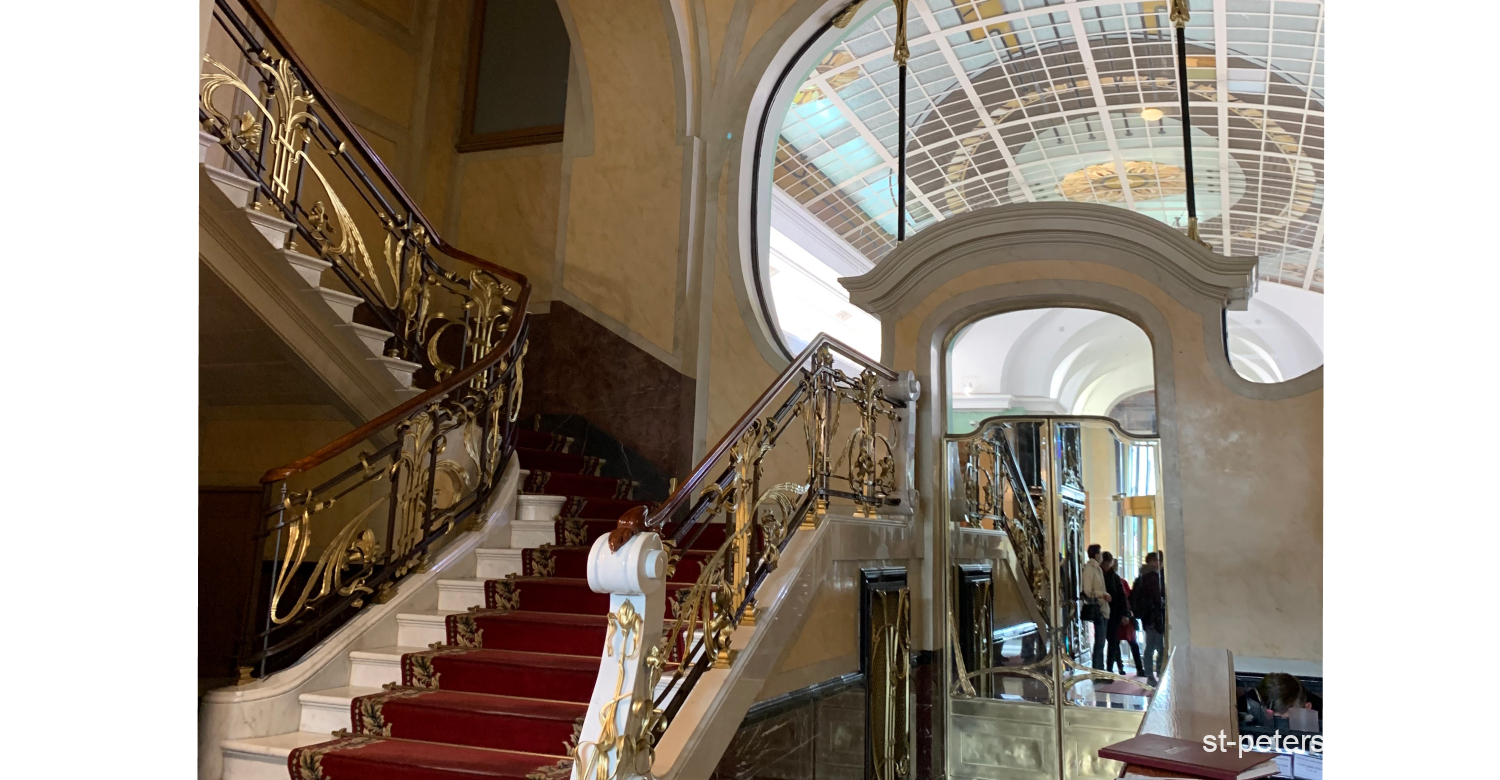 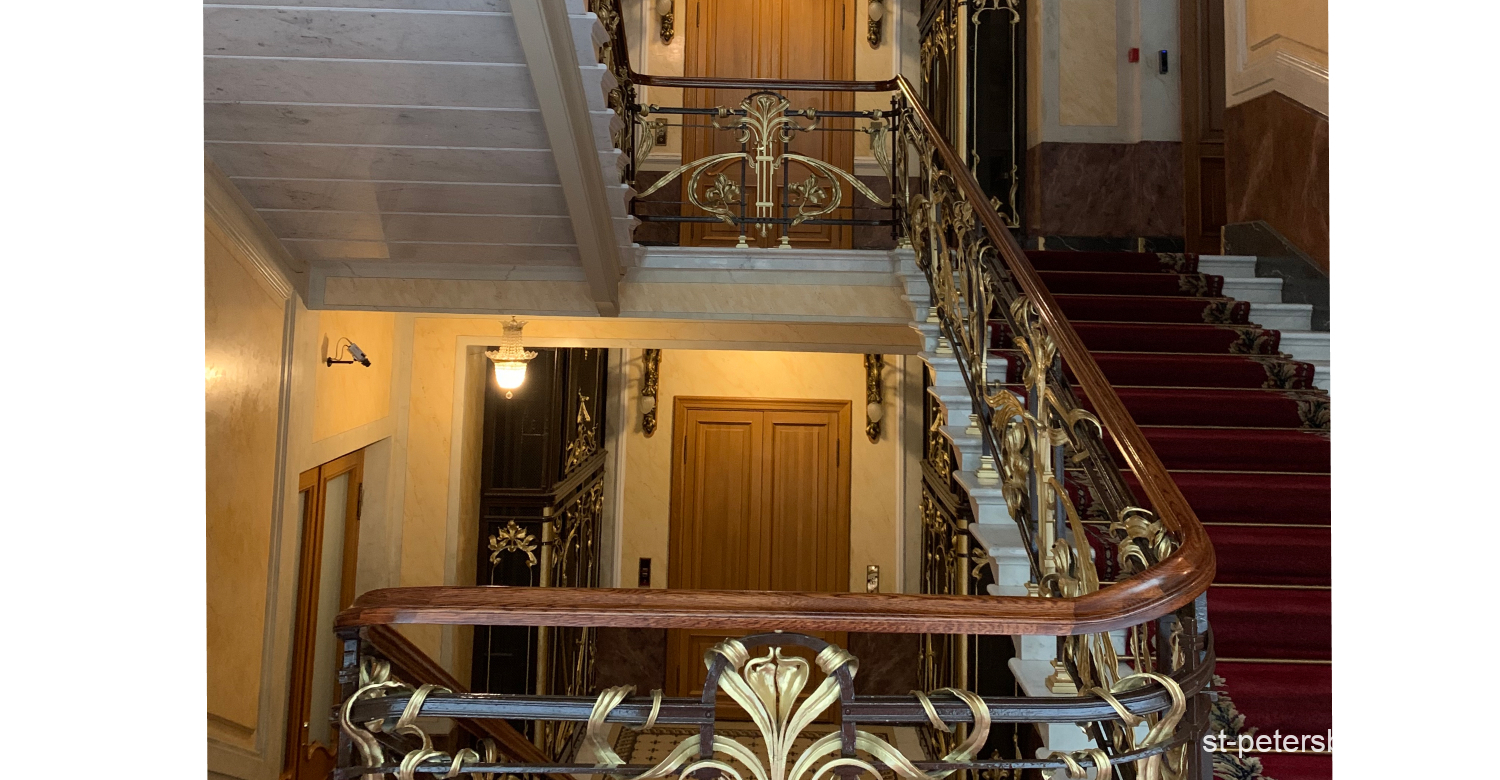 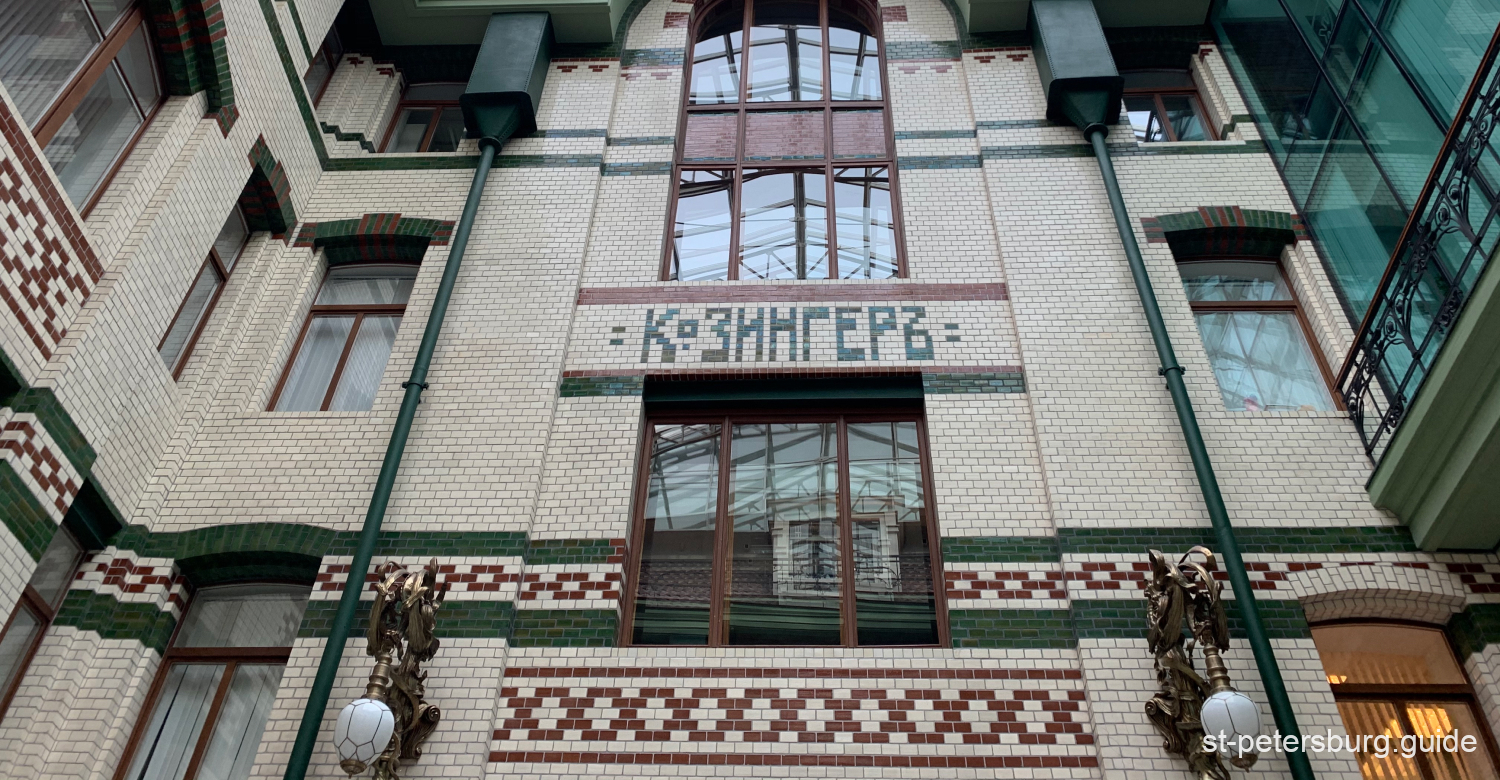 The corner part of the facade is adorned with bronze Valkyries on ships’ rostras. One of them holds a spindle and a sewing machine – symbols of light industry. Another one has a harpoon as a symbol of shipbuilding and heavy industry. On the facades of the building you can also see the attributes of Mercury (Hermes), the God of Trade: the Caduceus and the petasos. This tower is one of the most recognizable sights of Saint Petersburg.

And you have a great opportunity to climb to the roof of the Singer house and touch this wonderful dome with your own hands, see the Kazan Cathedral from a bird’s eye view, enjoy the perspective of the most beautiful part of Nevsky Prospekt as part of my private tour 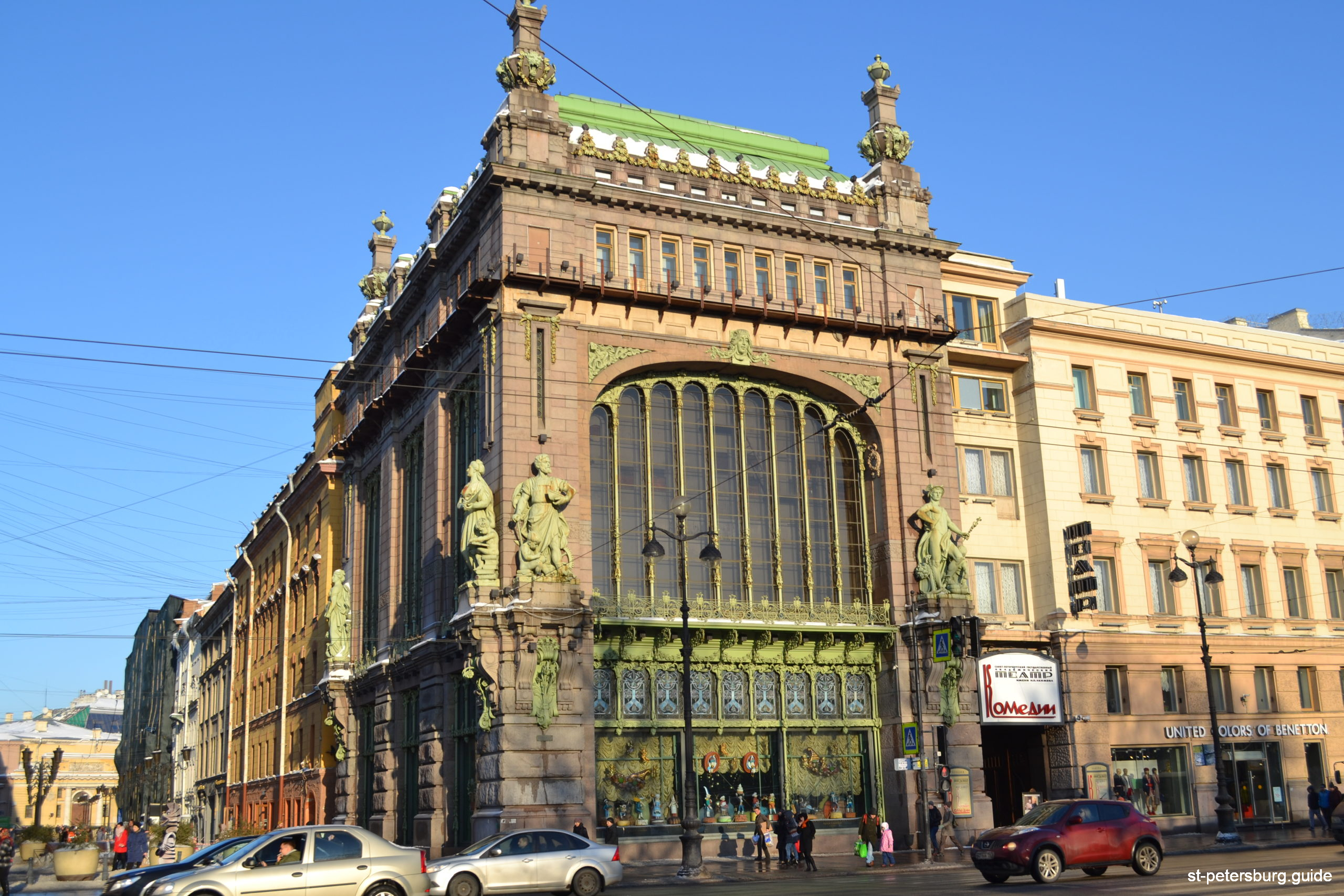 Singer House is a part of my private tour: