with the highest observation deck in Petersburg

Home » What to see » Churches and cathedrals » Smolny Cathedral

Smolny Cathedral is located on the left side of the Neva river, where earlier people made resin, used in ship building. There is a legend that Elizabeth, the daughter of Peter the Great, wanted to become a nun. For that reason she picked up the most suitable place on the shore of Neva.

Construction started in 1748, was led by Bartolomeo Rastrello. He wanted to erect the highest five-tier bell tour in Russia. Unfortunately, after his death in 1771, the successors of Rastrelli decided that it would be too high in comparison to the architectural layout of that area. All in all, construction of the complex lasted for 87 years and to some extent broke some records.

The building is almost 94 m high and can accommodate 6000 people. At first, the convent was called Voskresensky Novodevichy, later – Smolny.

Since 1765 there was an educational institution for young ladies of noble origins. By order of Catherine the Great, a separate building of Aleksandrovsky Institute was constructed specially for girls of lower estates. The third construction of the ensemble is Smolny Institute, designed by Giacomo Quarenghi. 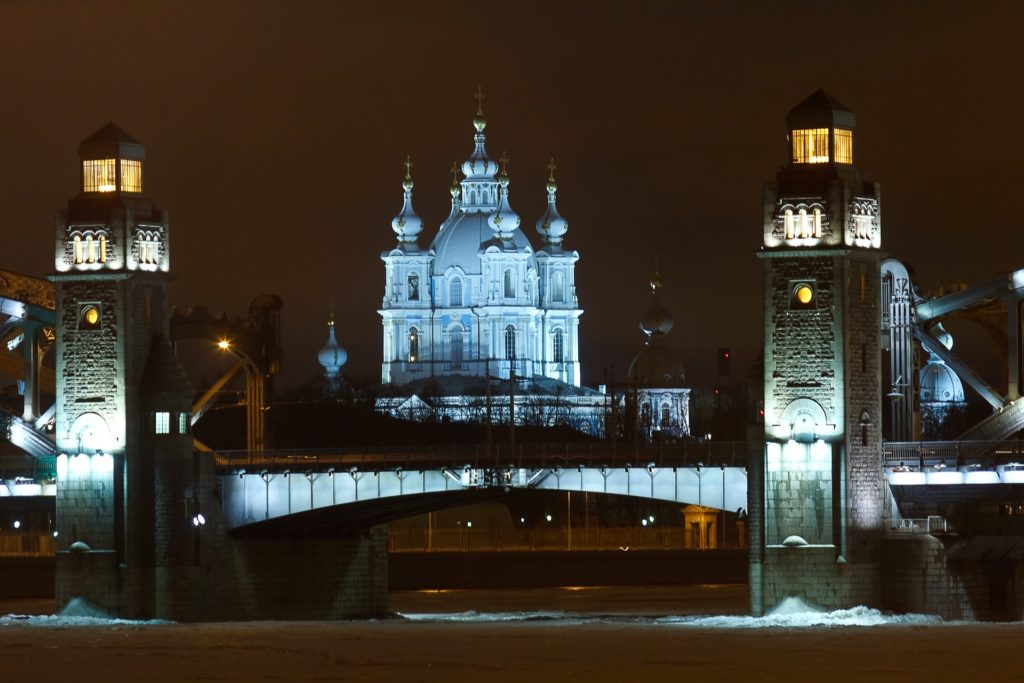 During the October revolution, that building was occupied by the Counsel of workers and soldier’s deputies. In 1922 everything was plundered, and premises were used as warehouses.

The Smolny Cathedral has sky blue facades that look festively all year round. The building is surrounded by churches and residential constructions with two-tier arcades. An architect Rastelli thought of erecting a single-dome cathedral, like it was in Europe. However, Elizabeth order to have five domes. In fact, only one of them belongs to the Smolny Cathedral, four others are bell towers. 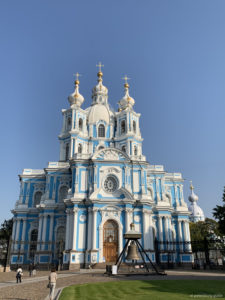 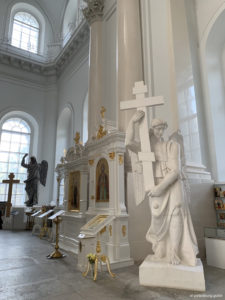 The inner garnish of the Cathedral is plain, but still looks quite solemnly: marble in the church halls, crystal balustrade, three magnificent iconostases. It was created under the supervision of an architect V. Stasov. Nowadays, the complex is considered to be a significant world-scale architectural monument. It is definitely a must-see place of Saint Petersburg. Unfortunately, not everything stayed as it was originally, but some icons were saved. Do not forget to climb up the belfry, which is the highest official observation deck of the North capital of Russia.

Smolny Cathedral is a part of my private tours: