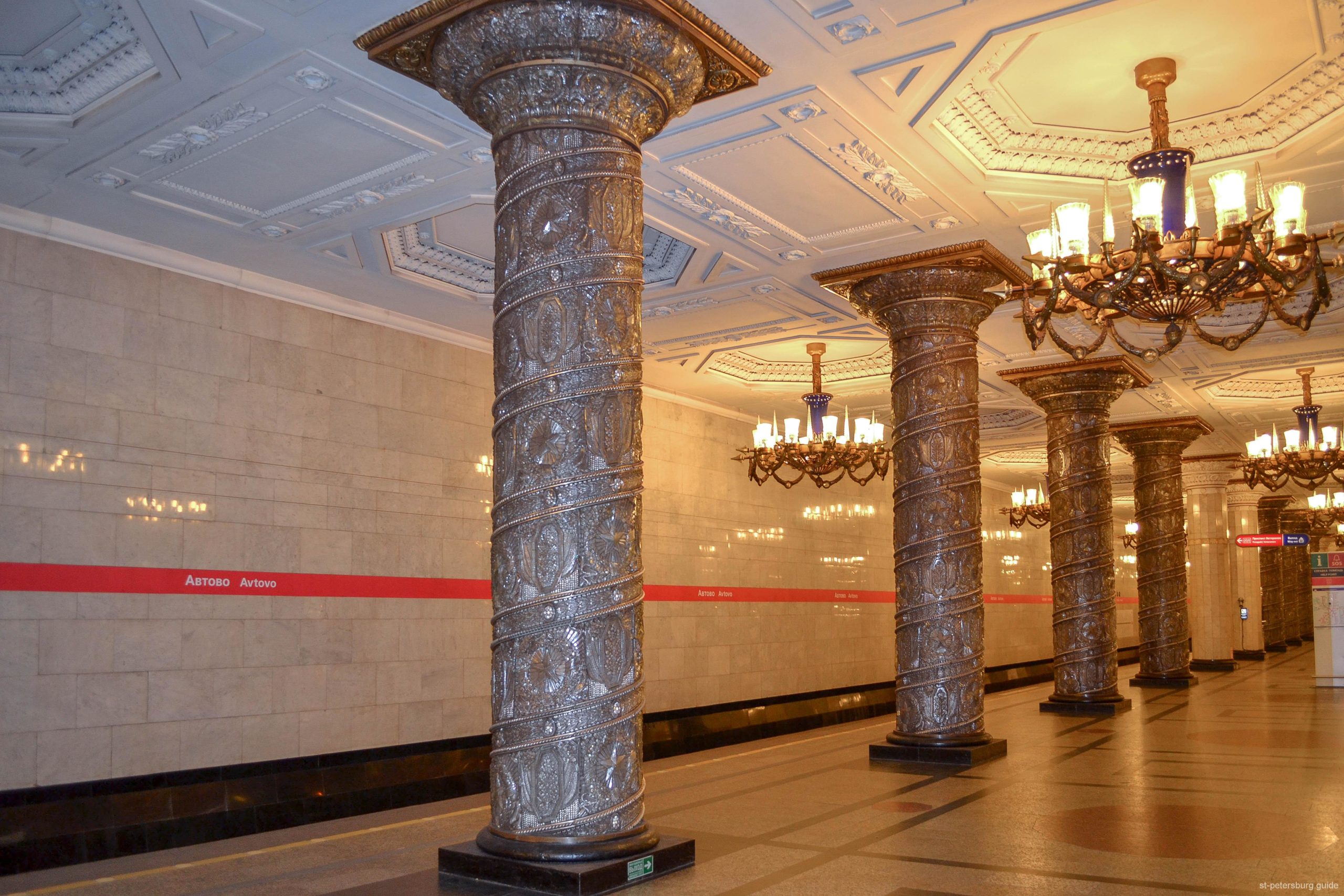 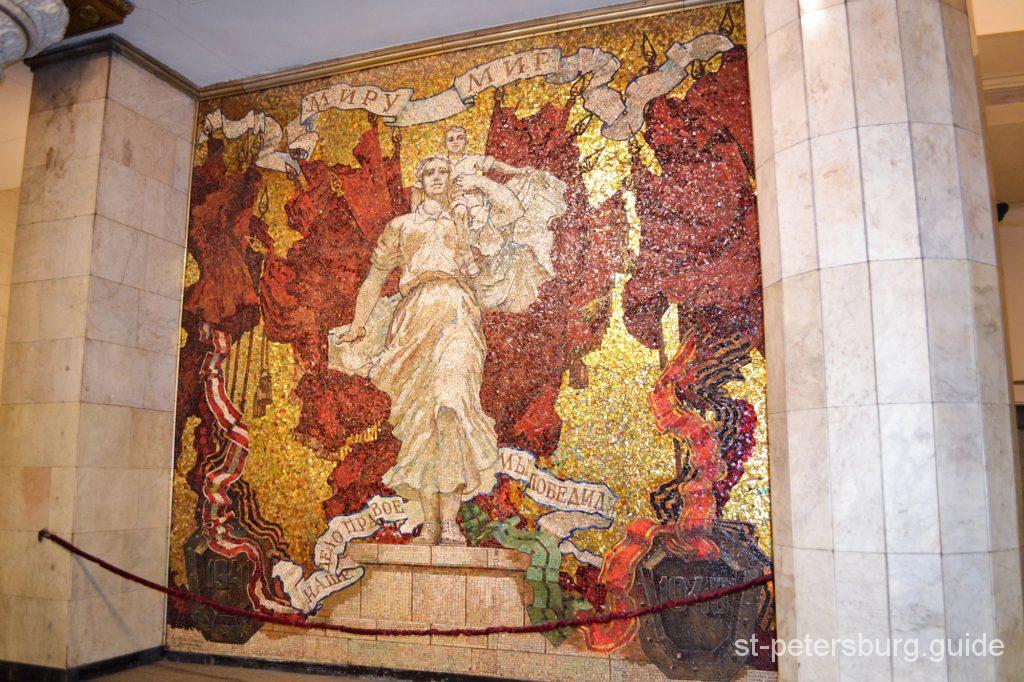 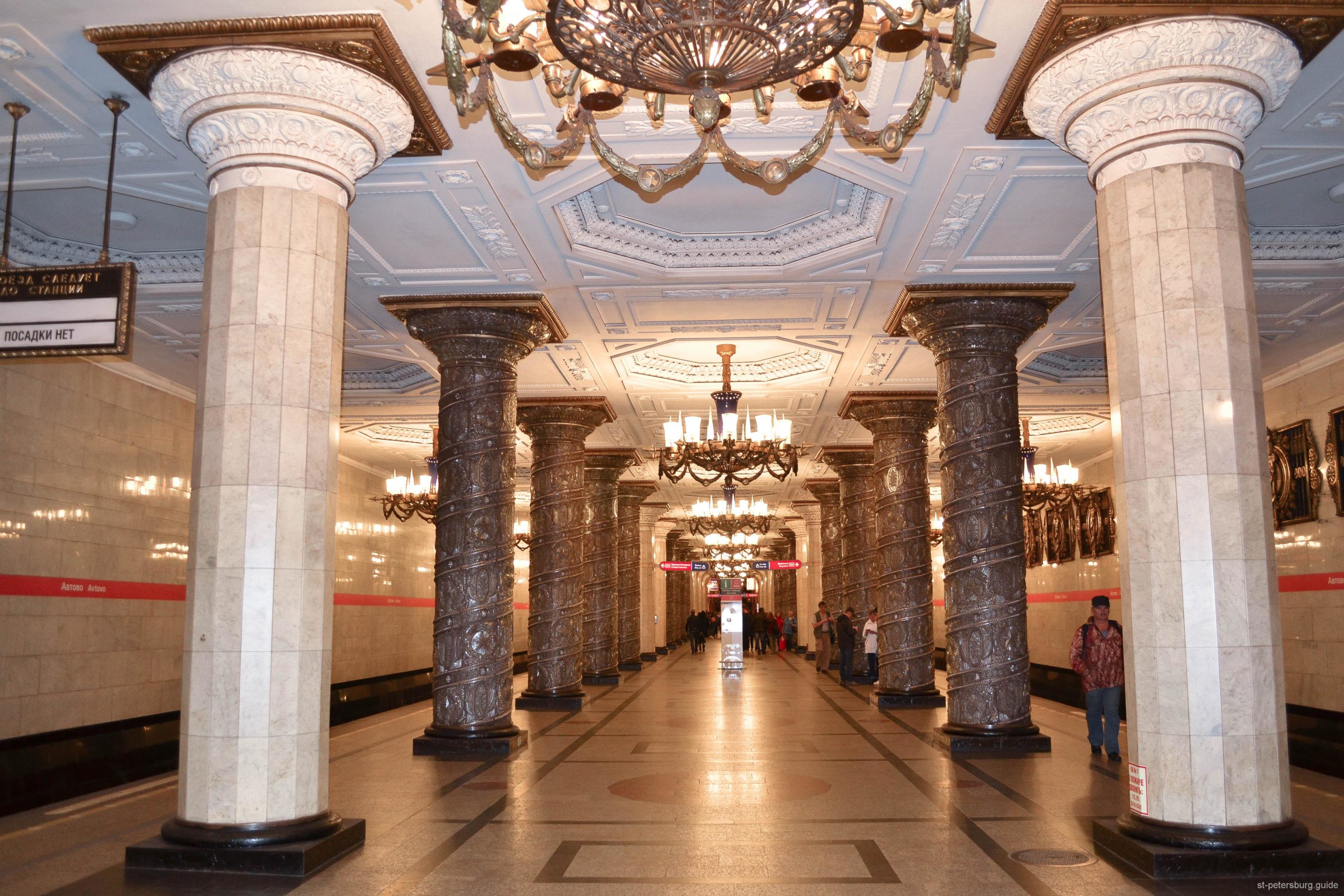 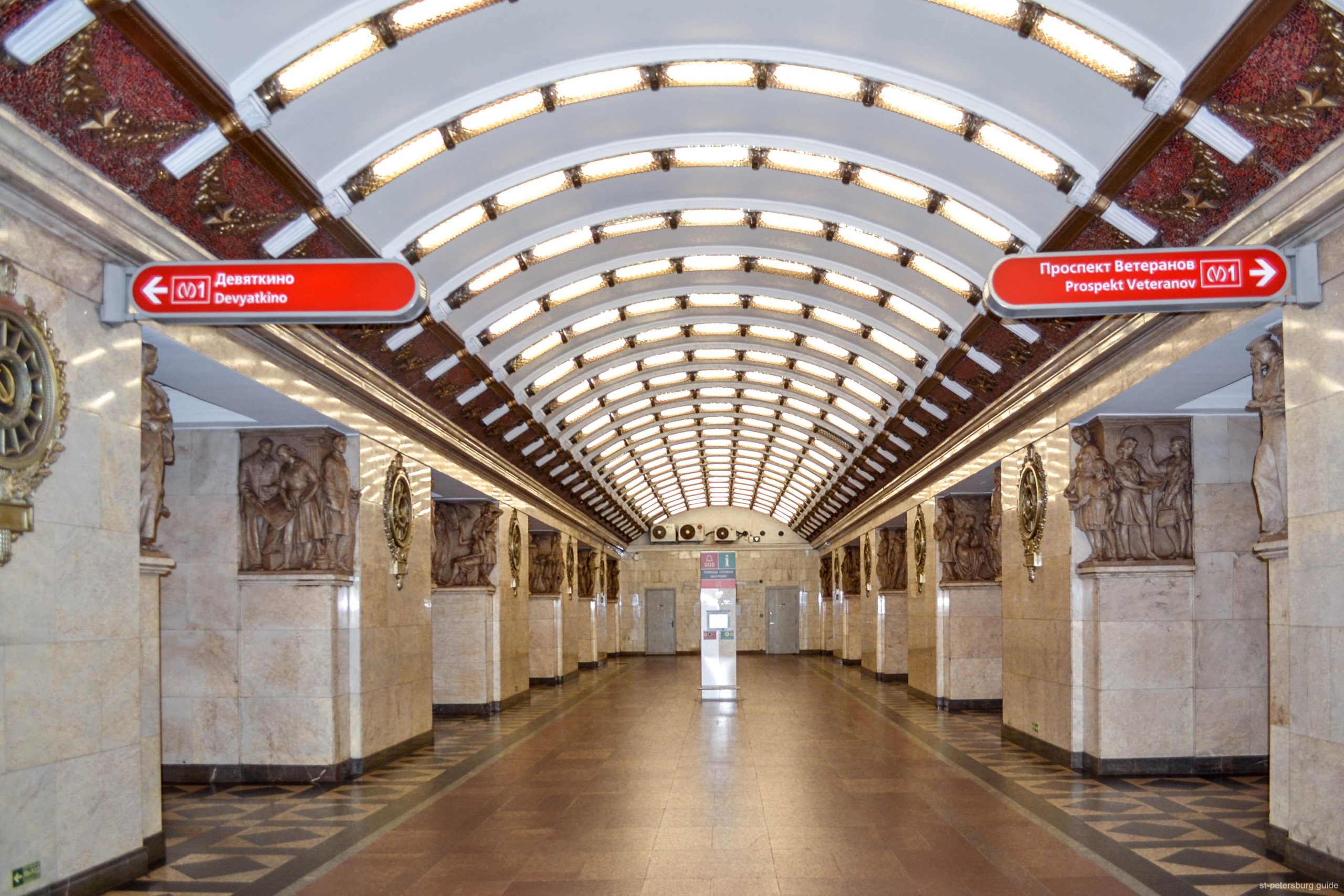 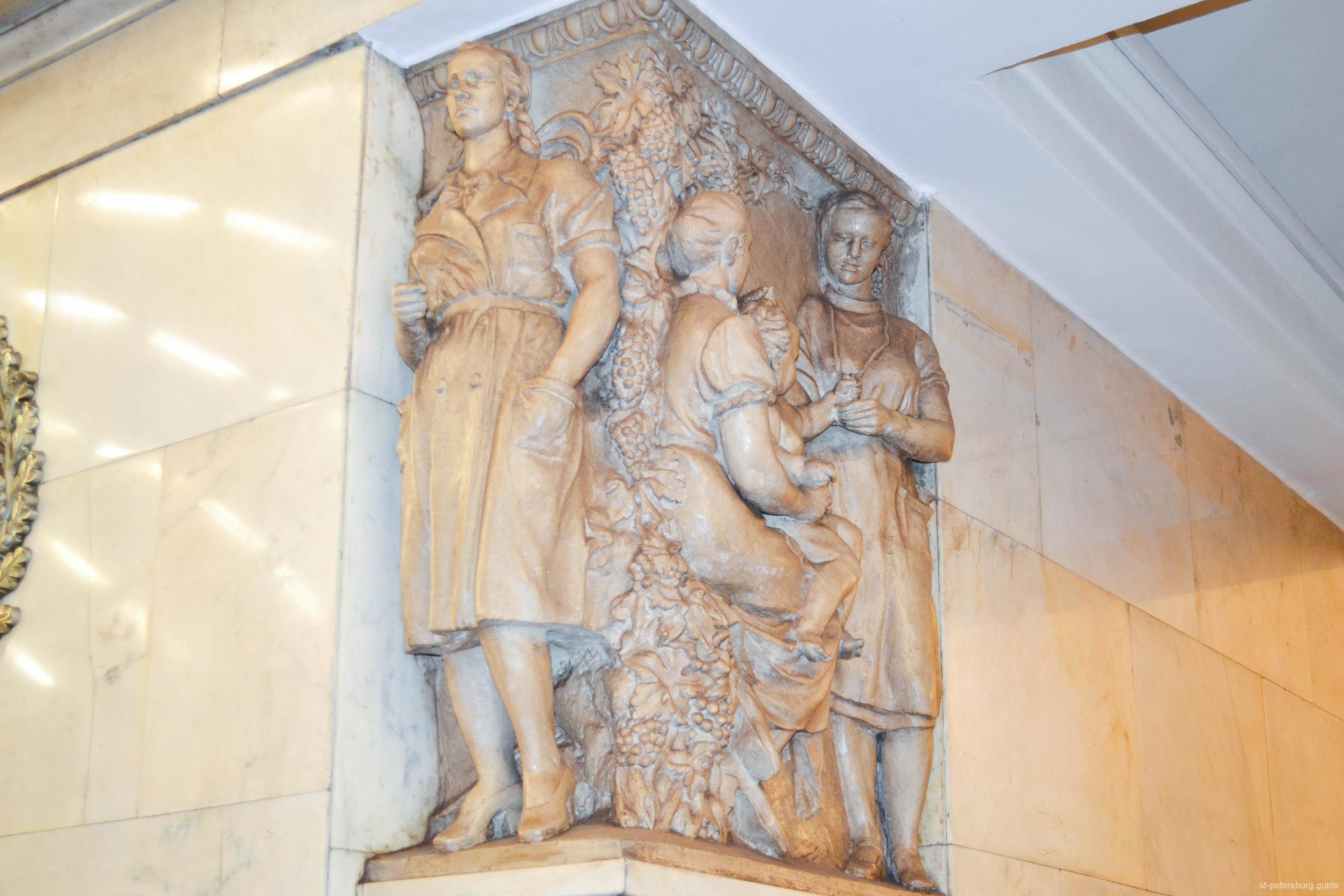 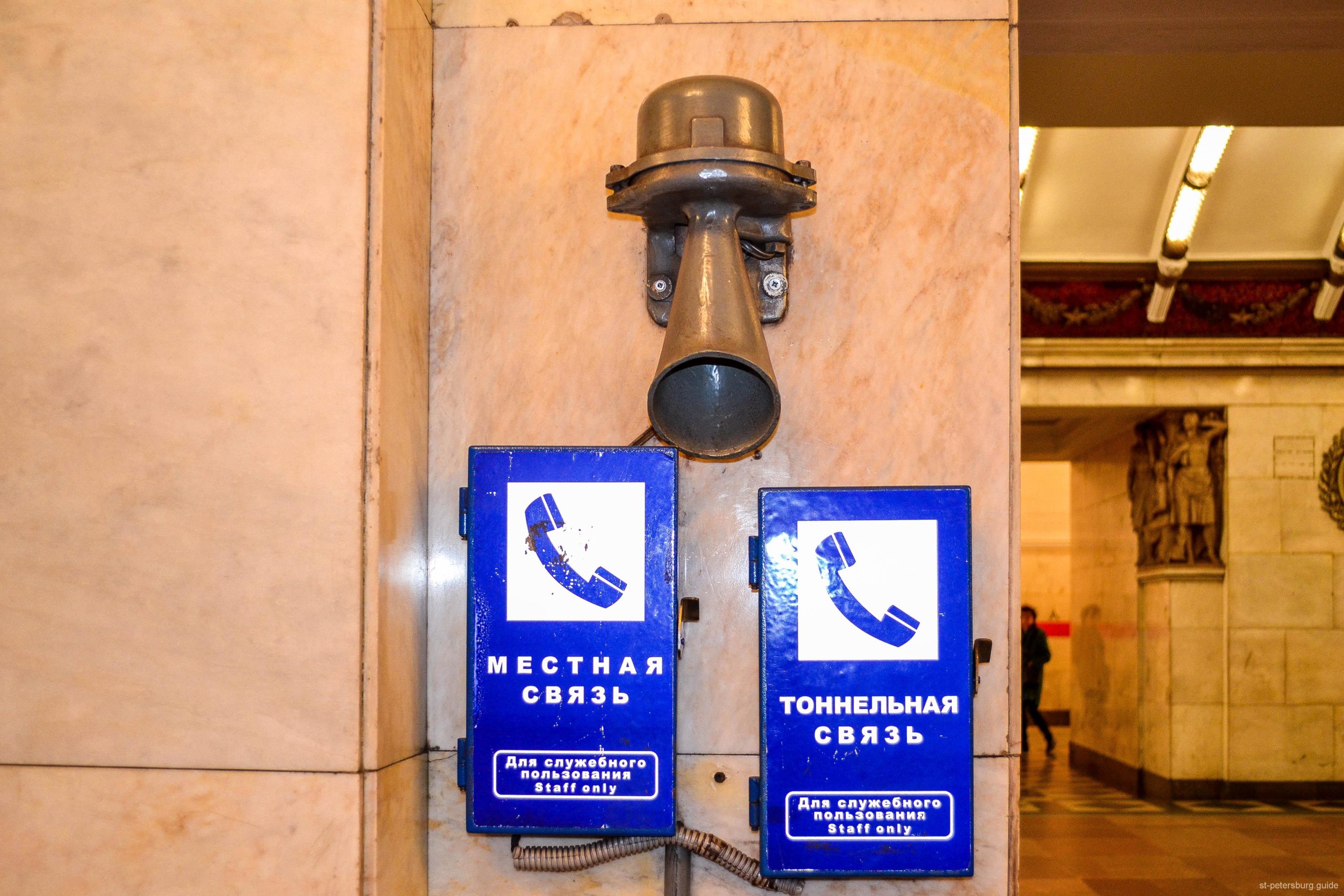 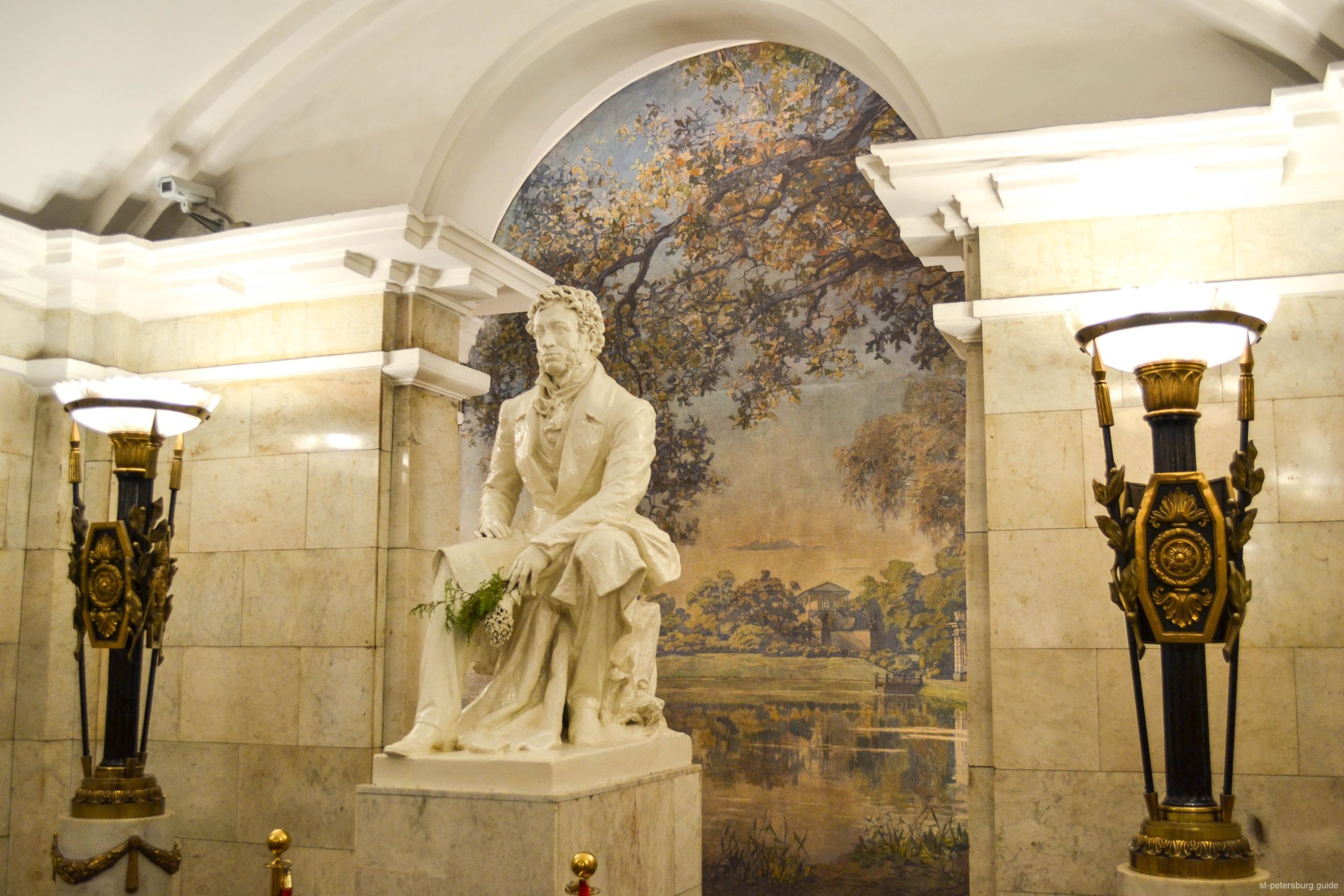 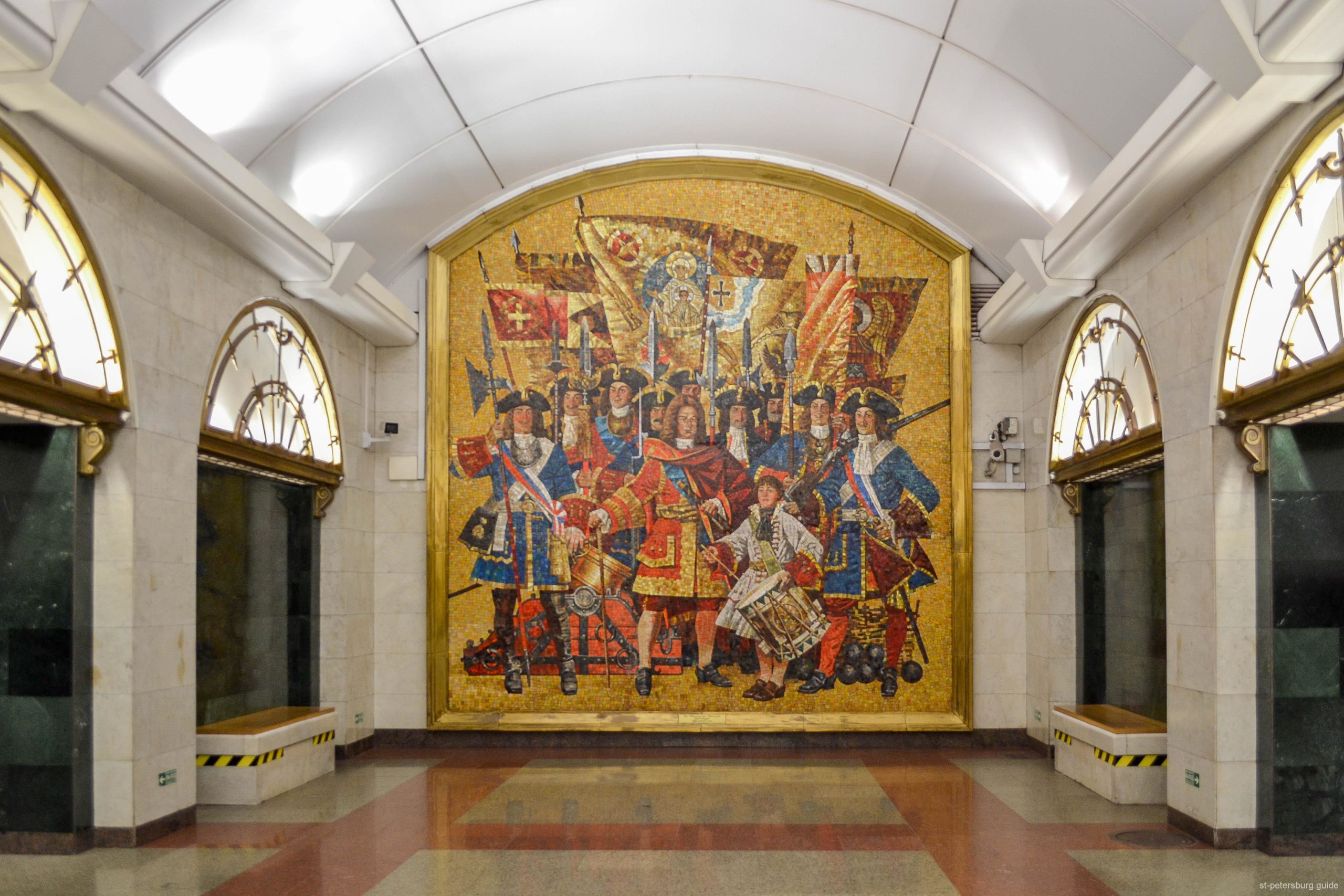 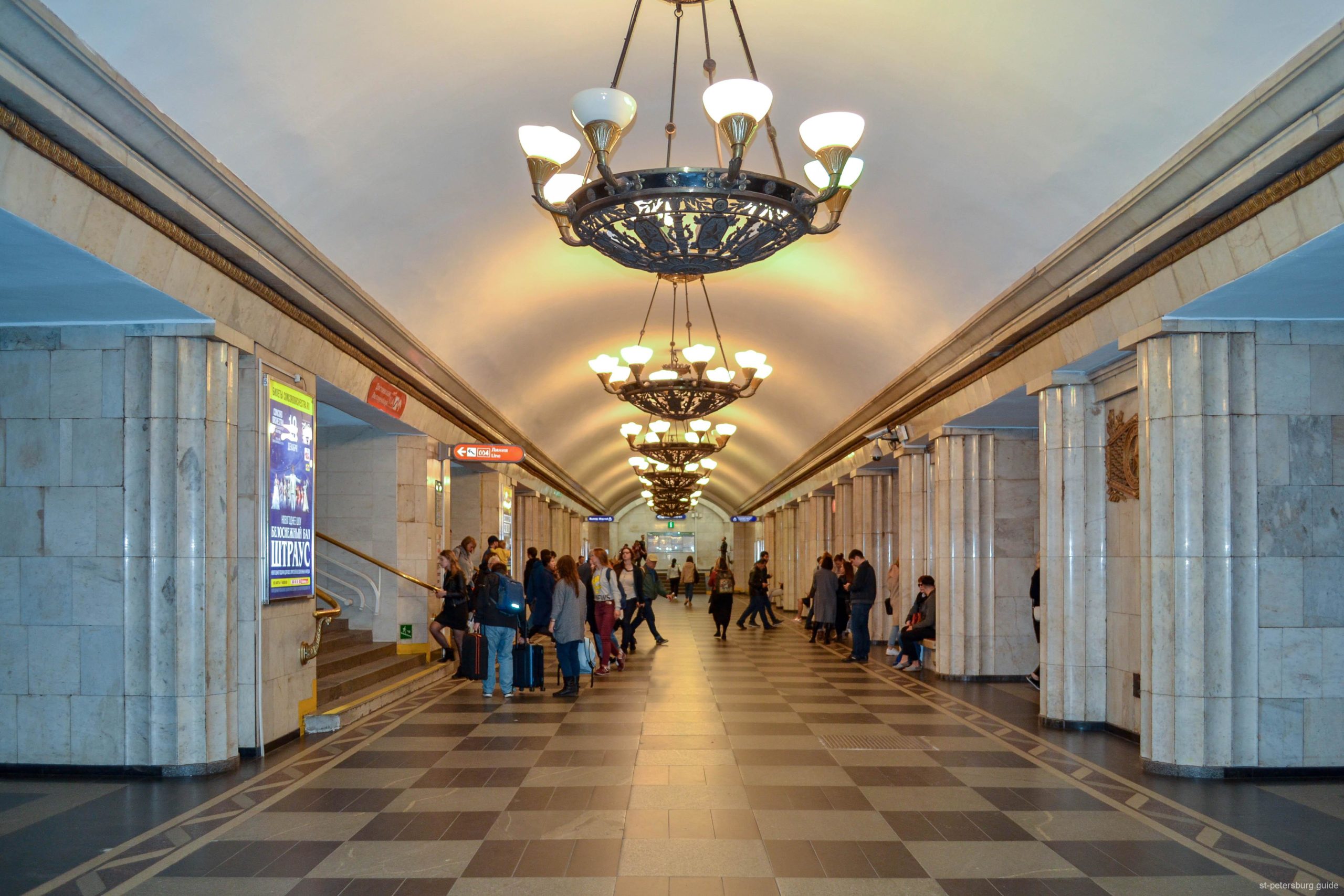 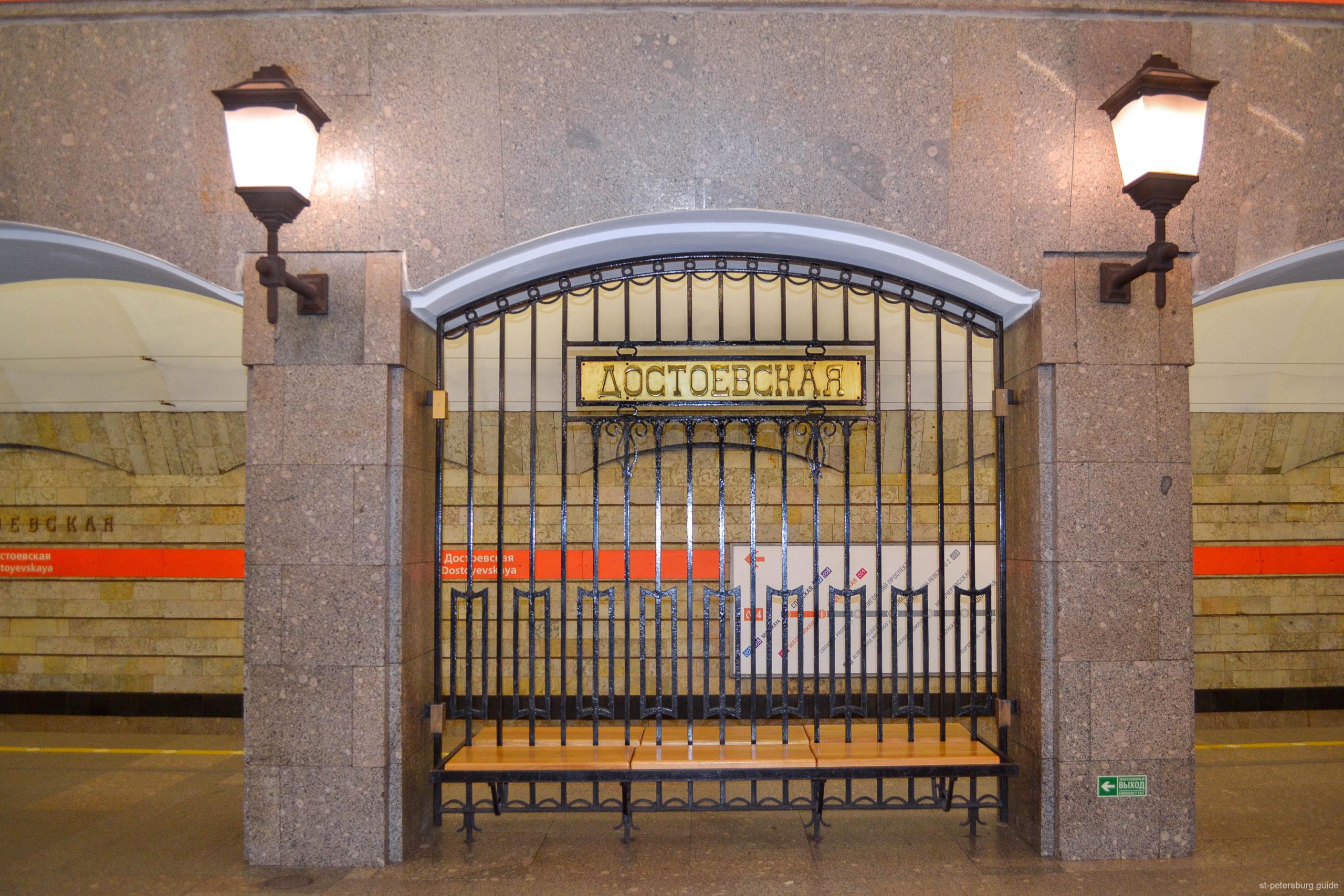 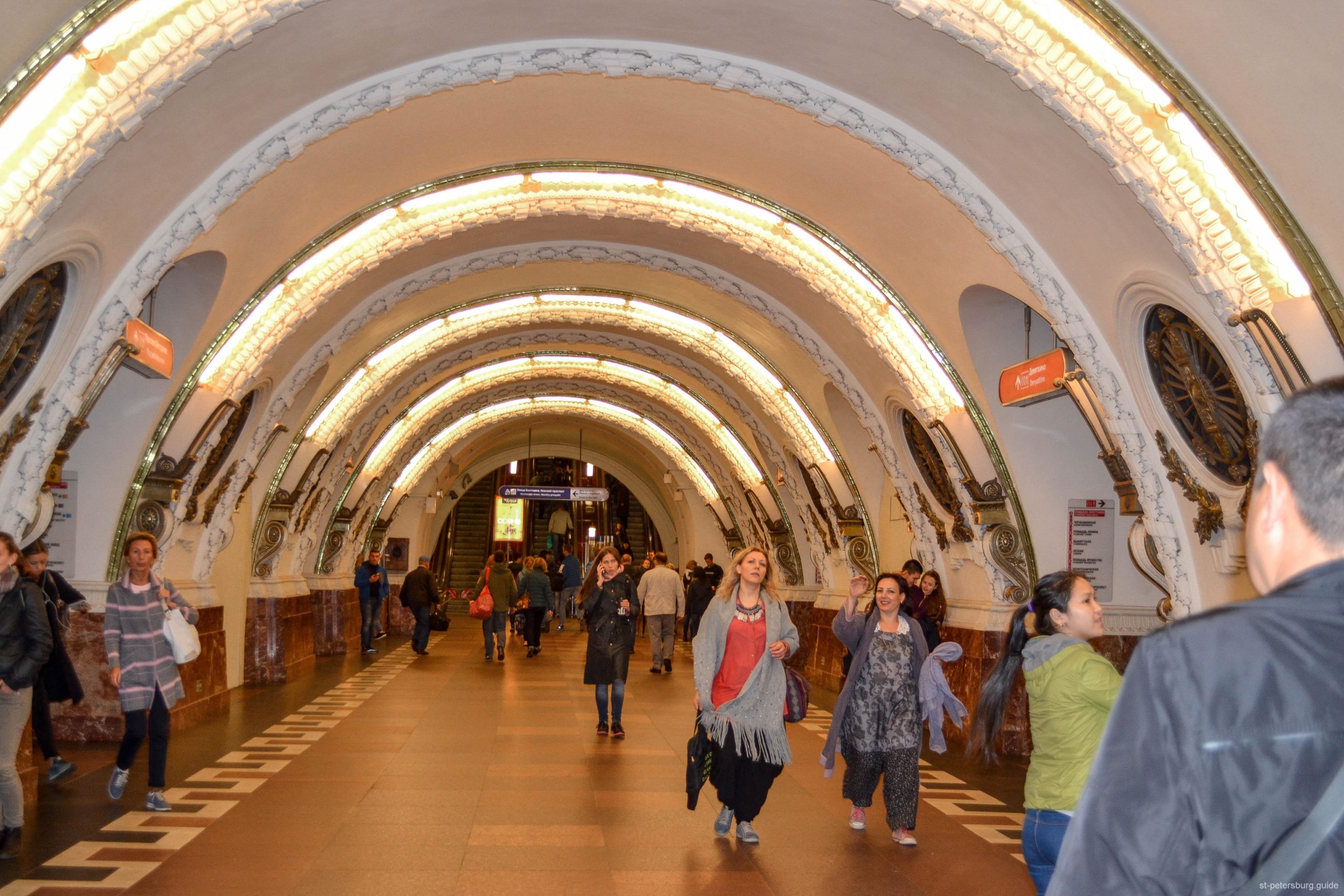 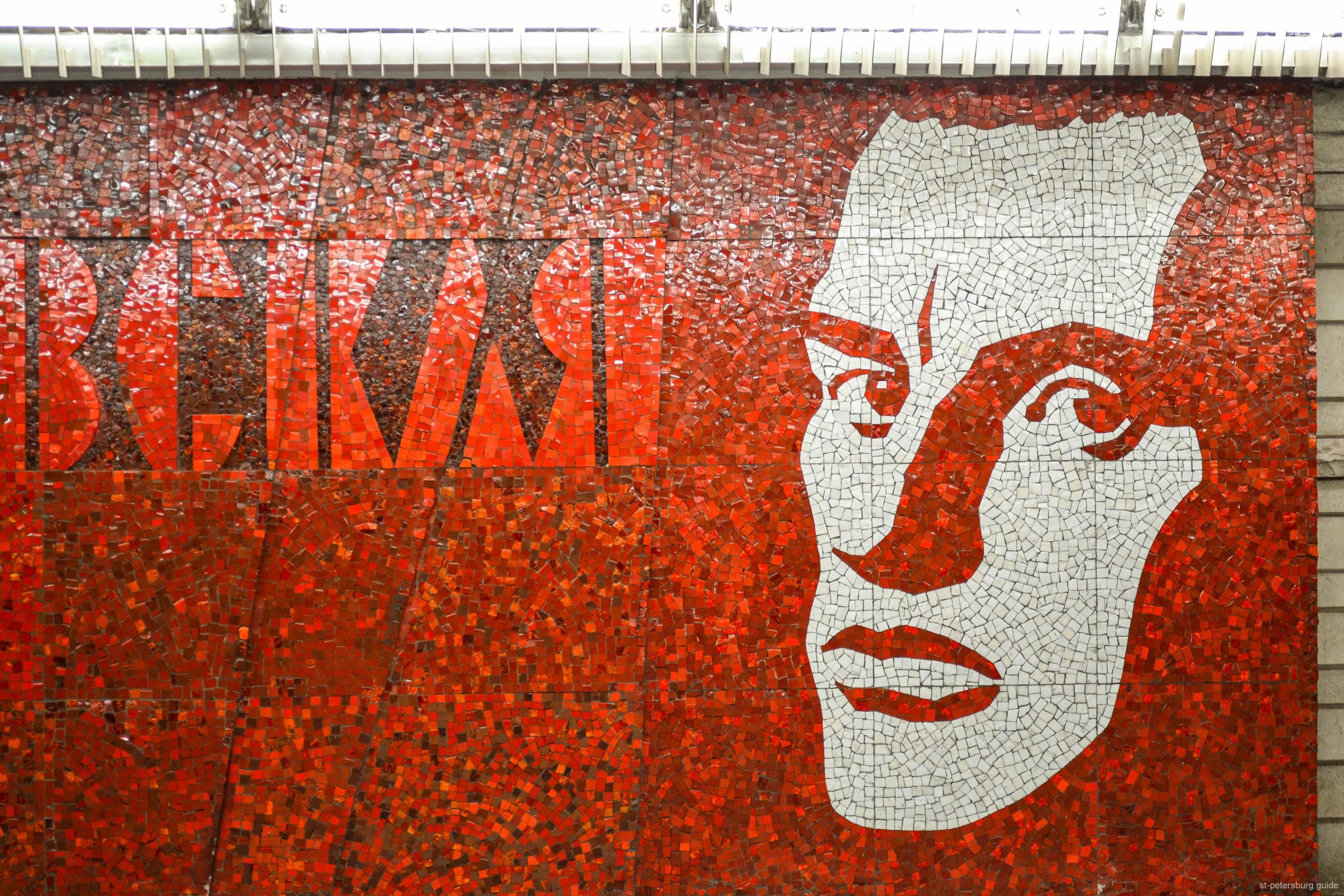 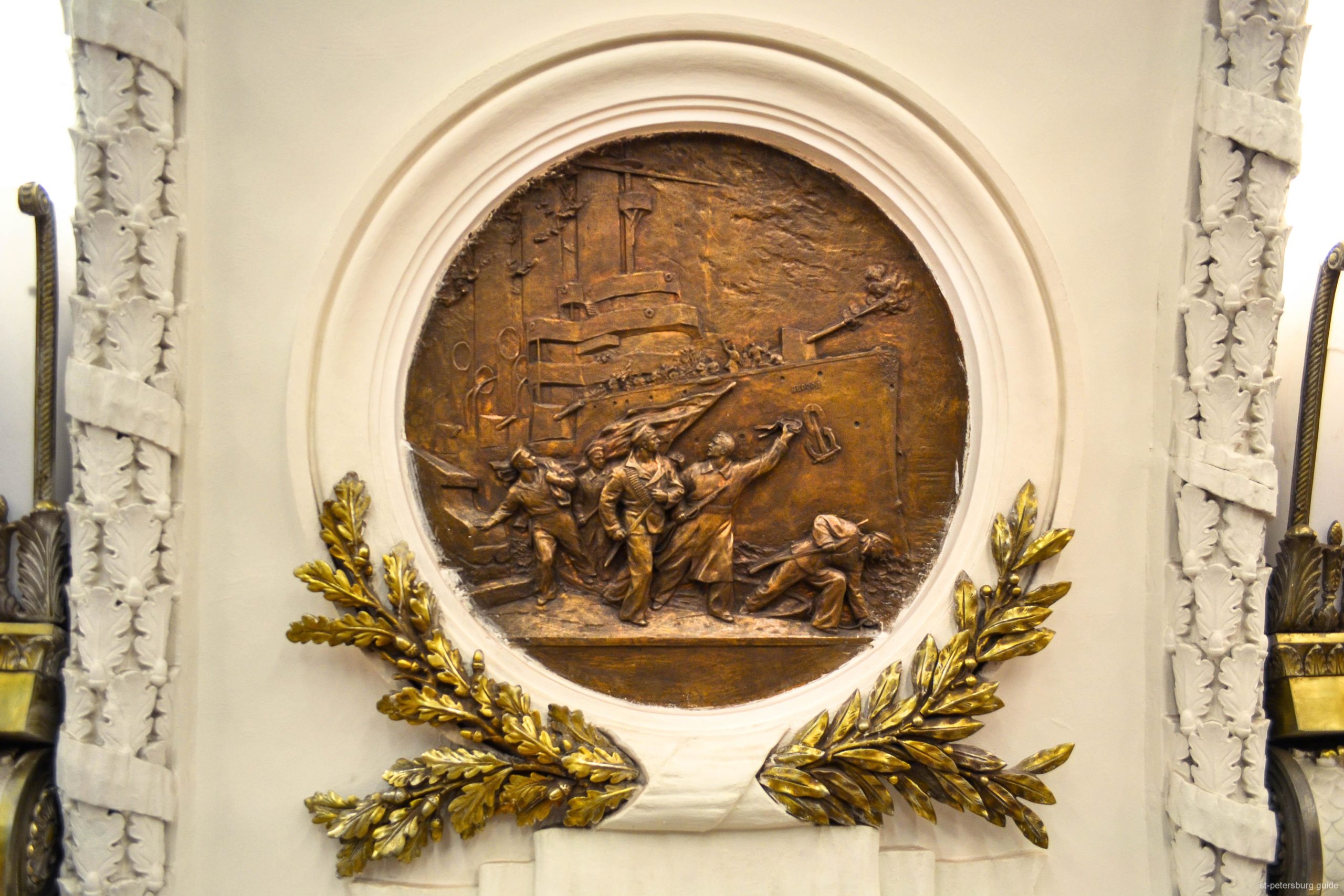 How about having the world deepest Saint Petersburg subway ride and interesting excursion with private guide? Nice to notice – when getting to the metro stations of St Petersburg, they can simply be confused with magnificent palace halls or lobbies of 5-star hotels and you are welcomed to enjoy the guided tour of this subway. During the Soviet times, Moscow and St. Petersburg underground stations were made as palaces for working people. This tradition was happily received by the architects in the post-Soviet period. Built in the characteristic of the era style, the pompous and monumental stations of the first stage of the metro became a grandiose embodiment of the Soviet idea in architecture, a symbol of the greatness and power of the state that created them. Being a part of the general plan, by design they reflect various aspects of life of the country of the Soviets and important milestones of its history, which, however, is rarely seen be every-hurried passengers. Private metro guided tour allows you get to know the decor accessories, architectural details,  their creation story, general history of St Petersburg and its major figures immortalized in the design of subway stations. Various kinds of marble, granite, crystal and glass, chandeliers, floor lamps, sconces, bronze bas-reliefs, ornamental mosaics, beautiful sculptures and artistic busts – all make metro stations look like palaces. In 2013 and 2014 the British editions of the Daily Telegraph called Avtovo one of the most beautiful metro stations worldwide.

By the way, by extending the tour time, together with a guide you can visit unique St. Petersburg Metro Museum located at the Primorskaya station and have sightseeing next to metro stations on the tour route, e.g. Nevsky Prospect, Uprising square with Moscow Station and the Stella of Hero City Leningrad, Vladimirsky Cathedral of the 18th century, monument of Fyodor Dostoevsky, Vitebsk Railway Station, Baltic Station, the Narve gate, the Kirov plant, the Admiralty and the Palace Square.

Below is an approximate route and time frame of the tour. Just write your wishes and I will adjust them individually for you.

Not many, probably, know that St. Petersburg metro could have appeared in the 1820s. In 1814, the Russian Emperor Alexander 1 as a winner of Napoleon visited Britain. There he was introduced to the distinguished scientist and inventor Mark Brunel. In the conversation, the emperor touched on the construction of the overland route across the Neva river. Brunel took up the project with interest, but thinking about the fragility of this design, he proposed the construction of a brick transport tunnel under the Neva. However, this project was not destined to incarnate in St. Petersburg, the scientist recycles his project conciliatory to the Thames and in 1843 builds the world's first underwater tunnel laid in soft soil, which later becomes part of the London Underground.

In general, the history of the metro begins in 1863, at the opening of the first metro in the world that was attended by the Prince of Wales, later King of Great Britain Edward 7. He also became the first passenger of this transport. In the late 1860s, the subway appeared in New York, built it above the ground. By the World Industrial Exhibition in 1900, the first line was built in Paris. Petersburg was waiting for its subway for another 55 years.

At the beginning of 1917 the Administration of the city railways presented a report "On the construction of the underground and the development of urban railroads in Petrograd." In June of the same year, the project was approved, it was assumed that by 1925 the St Petersburg metro system will not only be built, but will also begin to bring million profits. But everything turned out differently. The revolutionary events of 1917 and the ensuing civil war, the transfer of the capital from Petrograd to Moscow in 1918, struck out all previous plans for the construction of the metro. And only on January 17, 1941 the Council of People's Commissars of the USSR and the Central Committee of the All-Union Communist Party of Bolsheviks issued an order “to build the first subway line in Leningrad. Construction should be finished in the 4th quarter of 1942. Consider the construction of the metro in Leningrad as a top-priority defense construction”. June 22, 1941 World War II began in the USSR, the decision was made to stop the construction of the metro in Leningrad with the transfer of all the released labor, technical personnel, machinery and vehicles for defensive work. Construction was resumed in 1946, at the same time they began to develop the architectural part of the projects of the stations of the first stage. The Leningrad architects did not yet have experience in designing metro stations, but they wanted to create their own style not similar to Moscow. In 1947, work on a technical project was completed, it turned out that the construction of the subway had to be followed at great depths - in the thickness of Cambrian clays (50-100 meters). The track itself was split into two parts, the section of the first stage 11.2 km long from "Uprising Square" to "Avtovo" with eight stations connected the Warsaw, Baltic, Vitebsk and Moscow railway stations. At the court of the public presented 24 projects of architectural and artistic design of the stations and vestibules of the first subway line. The most successful projects were Avtovo and Narvskaya. The grand opening of the Leningrad subway was held on November 15, 1955.

During the metro tour you will see the most spectacular stations

Please keep in mind that it is possible to increase the duration of the tour by adding visit to the museum and sightseeing or reduce some part of the route. Just tell me your preferences.

The whole process of booking the tour was very easy, with the date and time being agreed with Anna prior to booking. The tour was very interesting with Anna sharing information about the Metro system and also what we could expect to see when we went to see other places of interest. We learnt a lot about the history of St. Petersburg and Russia. The stations themselves were beautiful and I would recommend this tour to anyone wanting to see the amazing stations and learn about the history of the Metro.

I highly recommend this tour. Anna showed me many metro stations and gave me insights into the significance of them, how they are decorated and why that is significant. She also took me to a couple of places that I wouldn't have been to if I had just stayed within the standard area of where you would go as a tourist of St Petersburg. A lovely afternoon

Anna was extremely knowledgeable and informative. I thoroughly enjoyed the tour of the Metro. I couldn't have done it on my own. I would definitely recommend any tour that Anna does if this one was indicative of her ability to provide a wonderful experience.